She ushers God into any conversation. In front of anybody. For any reason. Her 5-foot-9-inch existence lives for Him. She testifies His greatness in good and bad times. In a bereavement season, she amplifies His grace. Cleaving His name to her chest. Evident by the way she naturally consoles those who have lost all hope. “A lot of times, God has shown me things,” said Ella Mae Glover, 82. “He has given me strength all these years.” And like His son Jesus, Glover — or as her family pet named her — “Mutt” will speak the truth. Whether folks want to hear her truth or not.

I’ve known Mutt my entire life. Her late sister nicknamed “Fee,” was my great-grandmother GG’s best friend. During the late 1980s and early 1990s, my siblings and I crammed into GG’s maroon Cadillac Eldorado. A classic car. As sleek and elegant in motion as GG was. We cruised across Highway 49 in Baldwin County, Georgia, from the family farm located on Edward Hill Road to Kitchen Road. Fee lived halfway down Kitchen. A regular, white, wooded house. Nothing fancy. Definitely grandmother-ish in Southern cooking smells and design.

My sisters, brother and I played with Fee’s grandkids, Jackie and Danny. For an hour or so. Mutt would sporadically swing by for hellos, a bite to eat and country gossip. Her attendance bold. An intimidating figure for a kid until you got to know her. Mutt is a hugger. Gives hard kisses to the cheek. Follows up every embrace with a firm “I love you.” There’s no doubting her allegiance. When GG broke her hip around age 80, she thrusted into wheelchair lifestyle. One she struggled with until her 2004 death at age 91. Feeling sorry for herself, GG had a right-on-time caregiver in Mutt before passing away.

My siblings, parents and I helped Mutt housekeep, groom and dress GG while she insisted on cooking and running errands for us. But Mutt also gave GG blunt cues of God’s mercy when self-pity entered the room. If alive and breathing, it’s a blessing. Enough to rejoice about in Mutt’s eyes. She reminded GG almost daily of how blessed she was. After all, GG lived a rather “privileged” life on the land. An attractive, slim lady who could easily pass for white in a racist, rural society. Her being never really challenged. Mutt’s Rural American experiences, not so much. Her Blackness a reoccurring reminder. Tested and disrespected many a time.

And yet bitterness never overshadowed Mutt’s kind spirit. She became our family angel on Earth, especially in a time of aging, infirmity, death and eventually grief. As GG’s soul increasingly abandoned her body, Mutt carried on preparing meals, washing clothes, praying and holding GG’s hand with a holy grip. I studied Mutt work around death’s approach every weekend visit from college. Her tough presence giving me faith to confront a dying love. The day of GG’s funeral, I remember my immediate family coming back to Edward Hill Farm miserable. An emptiness in the home house I still identify with 17 years later.

But Mutt. Mutt proceeded tidying up GG’s room with a dignified stance. Hurt but undeterred. Determined to complete her last shift as GG’s caregiver with conviction. Like she had a job to do to help us all keep going. Mutt knew death on a stratum so remarkable. So powerful. In that moment, I knew I needed to mourn and celebrate GG. Through Mutt, I also knew I had to push through this heavy loss. The Most High gave me time with an amazing great-grandmother who introduced me to Mutt. And Mutt taught me how to trust in the Lord. That life goes on. So should we. Courageously and with caring hearts.

Throughout the course of my farm life, both women became guidebooks to Southern sophistication I studied hard. Examples of fearlessness. With a pure adoration for rural living. Which is why I’m so passionate about my work in agriculture and nature. The everyday people my writing helps uplift. A summer 2021 sunset with Mutt in her backyard — two houses down from where Fee lived — became my opportunity to learn more about Mutt’s might. To sum her backstory: beautifully rural and unabashedly raw. Small town events shaped her high-spirited soul. I pieced how and why she is able to brush by death poised. Unbothered.

Mutt birthed in Baldwin County two years before color TV developed. The baby girl of nine children in the year 1938. The precursor to World War II. Her single mother, Vanilla Simmons, worked local factory jobs in Milledgeville, Georgia. Vanilla and her youngins lived off Salem Church Road in the county. Made due the best they could. Mutt and her siblings walked to County Line Baptist Church to attend elementary school. It still stands today. “GG taught out there,” Mutt said. “Her daughter and your Grandma June always had a good lunch.” At age 13, Mutt started ushering at County Line. She paused her post temporarily when COVID happened. For about eight months. Currently, back at it.

Mutt attended Carver High School. She subsequently became part of the first class to attend Boddie High School. After graduating, Mutt earned a living as a maid for 18 years at now historic home Hines and Holloman. “The things I would hear coming out of their mouths and that house,” said Mutt, “but I wouldn’t take none of that mess. They knew that about me.” Mutt shadowed Vanilla from her towering height and church mannerisms to her choice in occupation as an adult. During the 1980s, Mutt worked for Baldwin County Schools as a cafeteria lady like her mom once did. She even moved and worked in other Georgia cities like Augusta for a stretch.

One day, she settled on returning countryside. Vanilla was getting older. Mutt accrued 13 years with the school system’s food service before retiring in 2003. She giggles of how cute and funny the kids were at West End and Midway elementary schools, especially when they wanted extra food. When Vanilla wasn’t cooking in cafeterias or her home kitchen, she equally baked. Her favorite creation: the caramel cake. Mutt continues to bake them in Vanilla’s honor. Safekeeps a few original recipes. Recognizing the value of land, Vanilla worked for then gave Mutt a piece of her land. A fourth of an acre after Mutt’s husband died in a 1965 car accident. Mutt purchased her own trailer in 1969. Raised four children — Calvin Jr., Carolyn, Sandra and Angela — with Vanilla’s guidance. Repeating her mother’s past as an only parent.

Vanilla passed away at age 77 on Aug. 21, 1980. Ten years later, Mutt returned home from church service, and a voice told her to check her breast. She felt it was God instructing her to do so. And sure enough, she felt a knot. A doctor’s visit the next day delivered the no-so-good news. Breast cancer. A 13-year battle with it followed. Mutt’s defense against the fight ahead forged through prayer, treatments, cauliflower and broccoli. Lots of it. She continued to clock in for her lunchroom duties all the while. Eventually beating cancer in 2003. She remains breast cancer-free. With highs came a lifetime of lows. Calvin Jr. experienced seizures from childhood to adulthood. He died at age 52 in 2010. “That hurt me,” said Mutt, sinking her shoulders, “but I healed. I did all I could for him while he was living.”

In a new era, Mutt has been a support to all of her grandchildren. Confronted by death yet again when one unexpectedly passed away November 2021. Another time she leaned into God for strength. The will to press on. She continues to help the others and tend to her five great-grands when called. Participating in school pickups and afternoon meal preparing. The senior usher had to restructure her church duties during the global pandemic. More checkup calls to members. Mailing cards. Harder prayers. The decades Mutt did usher in the physical regularly, she showed up in her Sunday best. Crisp white uniforms. Tissue ready. Those lanky arms on standby to wrap someone into love.

County Line Baptist Church staged a sundry of childhood memories for Mutt. Formerly wooden with a porch, she played games under the entrance. Inside she studied the word of God. Sang in the choir. Directly behind the brick building is where Vanilla rests. Older, Mutt’s rural recreation included car rides to Piggly Wiggly in her 1957 Chevy. Watching 13WMAZ news with the late Tina Hicks until soap opera “The Young and the Restless” aired. Listening to the radio. Dressing up in the mirror in hand-me-downs.

The last of her immediate family still living, Mutt retraces family reasons and ramifications that compelled her to live out these golden years on homeland. The stillness of corn fields that line Kitchen Road. Dirt road scenes with loved ones now gone. She insisted God came naturally into her life at County Line. She knew He was real because of His protection during so many life chapters of sorrow. She left me with these parting words as our evening expired: “Tell the truth and treat people right,” Mutt said. “Believe in God. Do that and you will have a full life.” 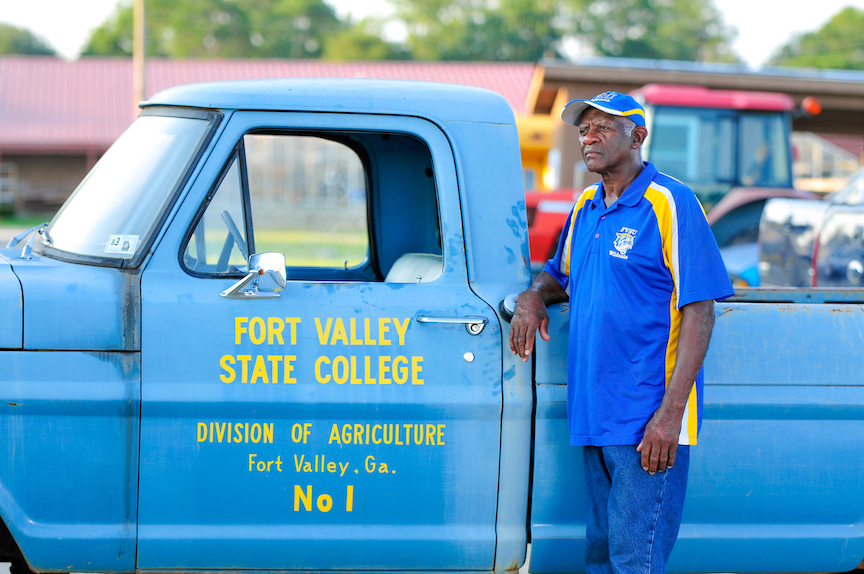