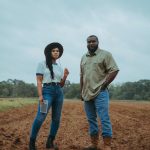 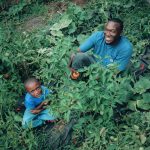 Who. Is. Lucy? And why is an unauthorized power line cutting through her burial site? Splintered beer bottles, busted tires and utility truck tracks suffocating her billfold-sized, defiant marker. The same scene for hundreds — maybe thousands — of nameless enslaved and freed Black residents of Harris County, Georgia. All neglected alongside 5122 Pierce Chapel Road.

“Well, this is it,” she said, pointing to an open area. “Look closely. You will see the depressions of gravesites.” The graves appear like one of those 1990s optical illusion Magic Eye books. Secret images magically materializing. “None of this makes any sense,” the Columbus native said. “The lack of dignity for the legacy of our ancestors who were among the early pioneers settling this area.”

HOW THE HISTORIC CEMETERY RESURFACED IN THE FIRST PLACE

Fixated on her lineage since childhood, Pierce devoted years to genealogy research about her family. Chronicling names, places her people dwelled. Her ancestral tree matured to the point it was time to revisit family plots — in the physical. Pierce, her husband and two teenaged daughters currently live in Washington, D.C. Mom and the girls road tripped to map their Georgia roots August 2019.

A pitstop to late older cousin Sarah Rozier (age 93 at the time) of Midland, Georgia, would initiate their local tour. First stop: the African-American and family cemetery at Pierce Chapel United Methodist Church. But it was padlocked. Church members contacted the property owner’s nephew, who showed up and let them in. He directed the descendants to a scanty path that led to a few tombstones and slabs. The sharp-minded nonagenarian’s eyebrows slumped. Her words slowly leaned into Pierce’s ear:

“This cemetery was much larger than this,” said Rozier.

And cleaner. Facing the graves, the site appeared typical. A slight pivot to the right and a dirty landfill of sorts ushered in a series of unsettling emotions. “This is my ancestral burial ground and a connection to my family history,” said Pierce’s 16-year-old, Hannah. “Seeing all the trash on their burial sites did something to me. We couldn’t just let it stay that way.” A disappointing visit. A quiet, baffled return to Washington, D.C. A jolt of indescribable disgust by the time Pierce entered her front door.

Weeks went by. Pierce knew she had to pull her thoughts together and organize. With the help of her husband, an attorney, guided steps eased the planning stages. “I really had to wrap my mind around it all,” she said, “then I had to wrap my mind around it all, again.” First line of business: Reclaim the cemetery. Form nonprofit Hamilton Hood Foundation, which she named after the great-great-great-grands. The foundation’s tasks were “to inspire others and guide their journey of discovery through the collection, documentation and preservation of historic and culturally significant spaces.”

Her daughters helped create a Facebook page about the community eyesore. Pierce contacted an archaeologist to conduct a preliminary survey of the grounds. Then the heavy lifting of researching and cold calling descendants. The last and most difficult part was contacting the property owner of the cemetery to voice her grievances. On behalf of the ancestors, the descendants, the local community and her children.

PAST DEALINGS WITH PIERCE CHAPEL (NO RELATION)

The cemetery barely holds onto the edge of Harris and Muscogee county lines. Harris County established December 1827. Visit its official website, and the city logs its history as a significant player in Creek Indian affairs. The site states it’s the first county in Georgia to have a commission form of government. The county also houses a U.S. Navy ship named after it. As of April 2018, residents totaled 34,475. Community members live near popular tourism sites F.D. Roosevelt State Park and Callaway Gardens. And since the Peach State is the new “Hollywood of the South,” the county boasts the designation of a “Camera Ready” community.

But that’s only a snapshot of the county. The good side. During 1860, the county participated in the agricultural economy (350,000 acres in improved and unimproved farm acreage). The population that year reflected the plantation political and socioeconomic system with both enslaved and free inhabitants as well. Of its 6,000 free 1860 citizens, 21 were Mulatto or Black. According to the 1860 census, the majority of the county’s citizens were enslaved Black or Mulatto people.

Some enslaved families transitioned into free farmers who sharecropped and continued to landscape the area into the 20th century. “Like most Black Belt communities, Harris County presently has these big farms now because of the wealth created in the past,” said Dr. Veronica Womack, rural researcher and executive director of the Rural Studies Institute at Georgia College & State University. “Generational wealth from agricultural labor.” By 2019, the county significantly increased in white residents.

Harris County is also famous for its lynching stories. It’s most recorded one happened during 1912. Four African-Americans (three farmers and a minister) were all lynched in Hamilton, Georgia. One of the farmers a female. Accused of killing a white planter — known to abuse Black women and girls — the case produced no evidence. Yet each were arrested. Hanged from an oak tree.

Facing Harris County and the historic African-American cemetery is Pierce Chapel United Methodist Church. Enslaved Black people buried at the now-crippled historic site are the very ones who built the alabaster brick chapel in Muscogee during 1955. Louise Calhoun Barfield of Columbus described Black’s relationship to the church in her 1961 book “History of Harris County, Georgia.” Barfield included a clipping from a 1925 Columbus Ledger article by Hon. T.H. Kimbrough that described the church:

“The physical structure is the best material planned for the comfort and durability, resting on solid rocks, strongly cemented. It has stood the storms of seventy year…The spiritual is based on faith and God’s love…The size, length, and number of sills double the average and are the best quality, they being wide-awake builders, wanting no sleepers in the pews, but did use one hundred strong sleepers in the structure…So that the colored people, then slaves might attend worship, one third (space) was set apart for them.”

The day finally arrived. Meeting the property owner, who also is a member of Pierce Chapel. This time Pierce felt prepared for the occasion with an archaeologist from cultural resource firm New South Associates as her survey eyes and ears. No surprises. Just an honest conversation to gain honest answers. Possibly artifacts to the past.

“When I explained what I discovered,” said Pierce, “the property owner said nothing really. She listened.”

A nearly five-hour-long visit and reconnaissance with the archaeologist. A lot of questions from Pierce. No solid responses from the property owner. Pierce did ask if there were records of enslaved ledgers and if access to them was an option. Nothing. Meanwhile, the archaeologist found instant “codes” or markings to help identify graves in the historic cemetery — and that extended beyond the section Pierce and her family were originally directed toward.

White quartzite stones (former headstone options), yucca plants (another resilient marker substitute) and periwinkle (a common ground cover) leading to the main highway. The archaeologist’s findings stretched the cemetery from the highway, down the hill to a where baptisms in Flat Rock Creek took place, straight back into the woods. Roughly .70-acres. Somewhere between 500 to 1,000 graves, perhaps. Then, he gestured up. There was this mysterious utility line at the front end of the cemetery, paralleling Pierce Chapel Road.

Not up to code, either. Something Pierce missed when she visited the year prior. Pierce and a few descendants hired an attorney to help secure a cease-and-desist letter after discovering construction materials on site. The Georgia Department of Natural Resources’ Historic Preservation Division created a FAQ document that addresses access to cemeteries on private property. It states:

If you are a descendant or heir of someone buried in the cemetery, there is no specific statute that addresses right of entry to cemeteries on private property. However, case law in Georgia has been interpreted to mean that the heirs of those buried in the cemetery have an implied easement on the property. The easement gives the heirs the right to prevent disturbance to the graves and the right of ingress and egress for taking care of the burial plots.

It is recommended that the descendants or heirs ask the landowner for permission to come onto the property and discuss notification of intent to visit, the frequency of visitation and passageway to be used. All steps Pierce took, which put the line at a standstill — for now. Tracking down the power company culprit is her current pursuit. “The presence of this power line is unauthorized and unwelcomed,” she said. Since the nearly 80-foot line dips above private property, the local power company isn’t obligated to share details to who installed it. But it connects to a Georgia Power line.

Patricia Phillips collected clues to her grandfather’s burial home for almost 20 years. Phillips’ late uncle Jessie Willis Sr. (who lived well into his 90s) became the link who would reunite Phillips to her granddad, Willie Willis. And forever bond her to Pierce. Born in Columbus but living in Atlanta, Phillips formed a healthy habit of checking on her uncle. Uncle Jessie too originated from Columbus and spent his later years in Stone Mountain.

Phillips listened with curiosity on each phone call. Even as his family memories and timelines would come and go. Every now and then, she would ask Uncle Jessie about her granddad. Only to arrive at the same dead end. The story would always lead to Willie Willis’ body returning home in a casket by train from Gary, Indiana. His wife by his side. That’s it. “About three years ago, my uncle finally remembered,” said Phillips. “When I got to the grave, that was very emotional.”

Her initial reaction: “Granddad, I finally found you.”

Her instant second: sadness through her soul. Phillips witnessed the exact desecrated scene Pierce did. And that impulse to do something about it kicked in. With 20-plus descendants and supporters at the historic cemetery that day, local media covered the story. Generating new support to clean and preserve the site.

The community catalyst Phillips and Pierce needed to put action behind designating the cemetery as a historical landmark and developing an interment list. “We want this cemetery to become a place of peace and rest for all ancestors buried — known and unknown — and for all descendants,” said Phillips. “Our ancestors will never be forgotten again.”

Neglected Black burial grounds are nothing new for America. A historical trend. One that new legislation is seeking to protect historic African-American sites against. Introduced in the House on Feb. 13, 2019, the African-American Burial Grounds Network Act unanimously passed the U.S. Senate on Dec. 20, 2020. The bill directs the National Park Service to conduct a study. Determine ways to identify, interpret, preserve and record unmarked, previously abandoned, underserved or other burial grounds related to historic African-American experiences.

Right on time for Harris County. Representatives Donald McEachin and Alma Adams introduced the House bill. U.S. representatives from Georgia — Sanford D. Bishop Jr., Henry C. “Hank” Johnson Jr. and David Scott — cosponsored it. The network act totaled 49 cosponsors nationwide. But as the network establishes, those quartzite markers the archaeologist identified start to vanish, said Pierce. The power line still dangling above. She has since rallied more than 50 descendants together to restore where African-American pioneers of Black Belt agriculture rest.

Her newest to-do list: get the historic site registered; conduct a burial plot survey; continue to identify as many beloved ones as possible; digitize and archive the cemetery research; transform the site into an agritourism destination; and create an oral history component for future generations, researchers, scholars, family historians and genealogists. For Lucy, her burial marker continues to grip the soil for as long as atonement takes. As for the descendants, restore dignity and recognition to the sacred space, said Pierce. “Including the histories and stories,” she said. “God has given us everything we need to walk up straight and hold our heads high throughout this process.” 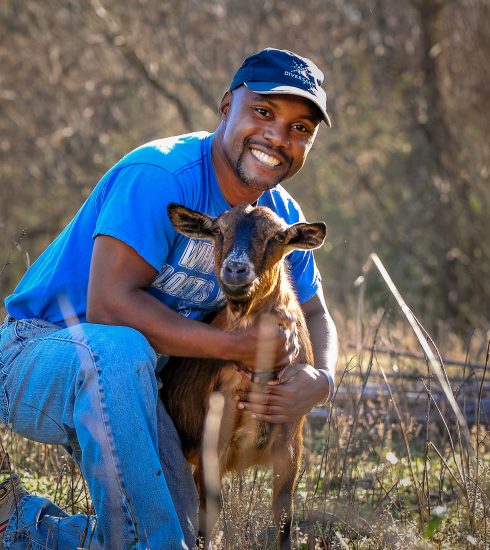 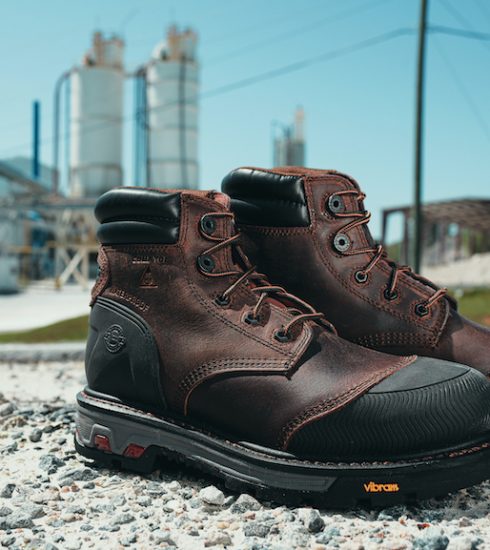